At Home With Bob and Ray 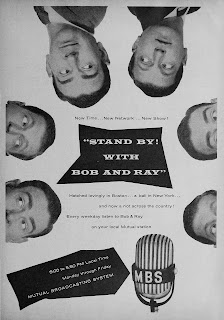 Timing can be crucial if you’re a publisher of puffery.

A fan magazine can invent a lovey-dovey story about your favourite couple, only to see it evaporate when they split up before the presses can get it into newsstands. We’ve posted a story about Jack Benny’s great relationship with writer Harry Conn which not only didn’t exist, the two engaged in a I-quit-no-you’re-fired routine soon after it was published. We’ve also put up a piece about Bill Cullen and his wife who would soon divorce.

And then there’s this story about the home lives of Bob Elliott and Ray Goulding. It has a cover date of March 1953. That’s the same year Elliott divorced the wife you see in the photos below. He’s quoted in Dave Pollock’s book Bob and Ray, Keener Than Most Persons that his marriage “was grinding to an end” even as Radio-TV Mirror printed this feature article. The photos below accompanied the story.

BOB and RAY — SPICE OF OUR LIFE
By CHRIS KANE ONE IS slight and blonde. (That's Bob Elliott.) The other's larger, darker, with an upper lip where his moustache used to be. (That's Ray Goulding.)
Instead of two minds with a single thought, they have half a mind between them. At least that's the impression they try to give.
"Bob's good on the ukulele," Ray says.
"Ray's good on the elevator," Bob says.
They came from Boston—full of beans, naturally—to take over NBC, which still hasn't recovered from the shock. The boys often introduce their show by announcing simply: "Bob and Ray take great pleasure in presenting the National Broadcasting Company."
Before they presented the National Broadcasting Company, with its glorious network facilities, they labored on a local show where they depicted the activities of Mary Backstage, Noble Wife. Mary was a girl from a deserted mining town out west who came to the big city to find happiness as the wife of Handsome Harry Backstage, idol of a million other women. Something like that, anyhow. All the characters were played by Bob and Ray—the scripts completely ad-libbed as they went along.
The boys are still satirizing anything and everything—but that ain't all. They'll even make fun of themselves. Ray claims he has a Shetland pony, Bob claims he designs his own socks.
"I own the Empire State Building," Ray goes on. "When my friends see me coming, they say, 'Here's old Money-Bags!'" "I get horse-hives," Bob mutters. "I look at a horse, and my nose runs."
"Bob was voted Most Likely To Succeed," Ray cries.
"Ray was voted Most Likely To," Bob parries. 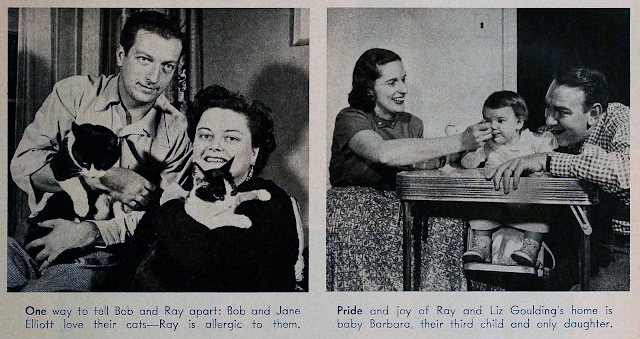 Ask them to tell you a few simple facts about themselves, never mind the clowning, and they look pained. "Nothing to tell," they say. Then Ray's phone rings. "Joe's on the phone," says somebody. "My brother Joe?" says Ray. Then he turns to the interviewer with a simple fact. "I have a brother Joe."
Besides a brother Joe, he's got a wife and three children. He met his wife Liz (née Mary Elizabeth Leader, of Springfield, Ohio) in the Army. It sounds like a joke, but isn't. She was a dietitian, he was an instructor at the Officers Candidate School in Fort Knox, Kentucky.
"We got married on a three-day pass," Ray says. "At a little spa in Indiana. A sweet little church around the corner —around the corner from an arsenal."
As he warms to his story, he embroiders, "General Patton was riding down the street outside crying, 'Blood and Guts!'" "Their song," butts in Bob, "is 'Stars and Stripes Forever.'" 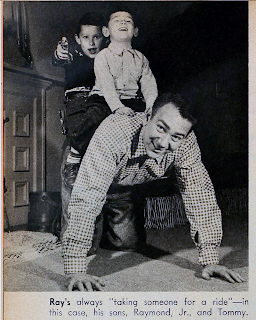 Ray hangs his head. "Every time we hear 'Reveille,' we look at each other tenderly—"
Ray and Liz were married in '45, came to Boston in 1946, after Ray's discharge from the Army. He'd been a radio announcer in Lowell, Massachusetts (where he was born and raised), after he got out of high school, so it was logical that he'd go back to being a radio announcer. He ended up at Station WHDH in Boston, where, by a laughable coincidence, one Bob Elliott was also announcing. More properly, Bob Elliott was disc-jockeying.
Bob was a Boston boy who'd had a fling at New York. Went to acting school there, and got a job at NBC. He was a genuine NBC page boy. Escorted studio visitors to their seats. As a lifework, this left something to be desired, so 1941 found the pride of Boston back home at WHDH.
In 1943, Bob married Jane Underwood, who was on the air for WHDH, too. Ask Bob what Jane did on the air, and he says vaguely, "Oh, women's stuff—"
From 1943 to 1946, Bob spent in the Infantry.
In 1946, he met his other half—professionally speaking. As we said, Bob was disc-jockeying over WHDH. This Ray Goulding used to come in and read the newscasts. After the news they'd kid around a little, and soon proper Bostonians were howling improperly at the wit and jollity and fun and games.
New York was their next stop. 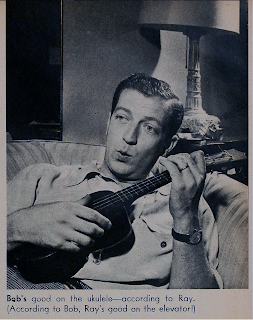 Bob and Jane now live in a three-room-and-terrace apartment in the East Sixties. They have two cats—live—and one sailfish—stuffed—over the mantel. That is, the fish is over the mantel, the, cats are not. Speaking of cats—to which Ray, by the way, is allergic—Bob and these animals are on positively intimate terms. Bob once broke his leg, went to bed with the cast on it, and woke up the next morning to find that a lady cat had had kittens all over his splints.
His sailfish, while not as imaginative as his cats, has an interesting history, too. Bob was in Miami last summer, had never been sailfishing before, engaged in mortal combat with this monster fish, brought it all the way home to New York to gape over the fireplace, and now decries the whole affair. "That?" he says. "Oh, I just happened to go fishing—"
The Elliotts, though comfortably settled in New York, still hang on to their house and Ray—Spice of Our Life in Boston—or, rather, Cohasset. Bob literally hangs on, weekends. He goes up and shingles the place, though it looks as though he's going to be much too busy ever to spend much time in it any more.
Ray and Liz and their kids live in a rented house in Harbor Acres, which is out on Long Island, near Port Washington. Raymond, Jr., is seven, Tommy's going on four, and the baby, Barbara, is a year-and-a-half old. 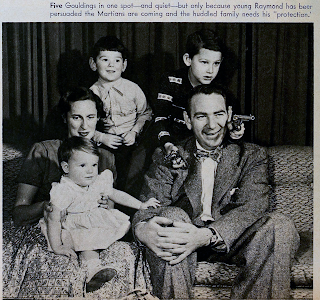 All are healthy, good-natured types and, besides health, Raymond's got ingenuity. Father Ray's been buying handsome tools for a long time—a good shovel, a stout hammer—and one by one they disappear.
He suspects Raymond of swapping them for Buck Rogers guns and atomic chemistry sets.
"Where are my pick and shovel?"—or words to that effect—he'll say to his son and heir.
Raymond will favor him with a pleasant smile. "I don't know."
"I bet the next-door neighbors' kids have a fine set of tools," Ray says bitterly.
"They go to bed at seven," he tells you about his sons. And adds, "They're still running around the bedroom at eleven."
Tommy, who's exhausted from staying up so late, has developed a new trick. He gets up in the morning, has his breakfast, goes back to bed around nine, and sleeps till noon. Then he rises, prepared for the night's festivities. Barbara's too young to know what's going on, but both boys get upset if anything happens to Ray on TV. The night Bob "shoved Ray out of a fifteen-story window," Raymond and Tommy tore out of the room screaming. "It was," says Ray, "a pretty hectic night at my house."
Ray's hobby is photography (he doesn't develop his own stuff, doesn't have the time); Bob's is painting. 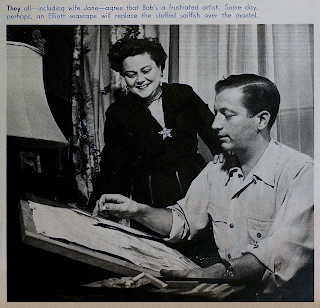 Bob is, in fact, a frustrated artist. He never studied the craft particularly, but, if he hadn't had a radio job when he got out of the Army, he might have turned into another Winslow Homer. He likes to do seascapes, and he once exhibited. Well, that is, not exactly exhibited ... it seems there was an ad club show in Boston. ...
Anyhow, if that fish wasn't over the mantel, a seascape would be.
Bob also plays the ukulele, bringing to this effort the same lack of training, and the same gusto, with which he paints.
Ray can get a few notes out of a small toy trumpet, but they all sound like "Taps," even when he's doing "White Christmas." And, besides, the only time he really gets any pleasure out of trumpeting is when Bob's talking to somebody, and he, Ray, sees an opportunity to confuse an issue or two.
Which is one reason why venturing into their NBC office is an act of recklessness. They sit behind their desks looking more or less normal, but don't let that fool you. Ray's nameplate is upside down. "For people who come in upset," he says. Bob's feet are waving in the breeze. "I was wearing these shoes when I got into show business," he says. "Three weeks ago."
"We're getting a new sponsor," Ray says gravely. "His products are right out of this world."
"Available only on Mars," adds Bob, "and perhaps Neptune. Our show will be out of this world, too."
That's the way it goes—and so do you. As you reel out, the tinny music of a toy trumpet follows you. It's playing "Taps."
Yowp at 12:09
Share