Here are some beautifully-drawn ads from the trade paper going back more than 80 years. You can click on any of them to enlarge them.

Before we get to them, let’s pass on a couple of promo cartoons for The Film Daily Christmas Fund from 1929. The first one stars Krazy Kat, produced by the Mintz studio in New York. There’s no signature on the drawing. The second one is really cool, as Bill Nolan has drawn a caricature of himself along with Oswald the Lucky Rabbit, whose career in 1929 had taken him to the Walter Lantz studio after employment stops with Walt Disney and Mintz. Nolan, by the way, had drawn the Krazy cartoons in the mid-20s. 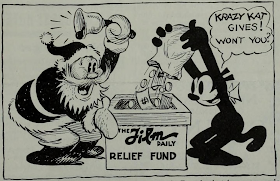 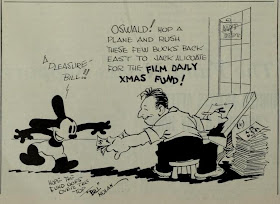 Now, the great ads. The first is for a Harman-Ising cartoon from 1935 and next to it is a Disney ad from 1932.
Below it is a Columbia ad for a three-strip Technicolor cartoon, except the ad itself is mainly in two colours, red and green. It’s from 1935. Next to it is a 1932 ad that might as well be for a cartoon called “Marketing Mickey.” It’s not only pushing the mouse, but bragging about the stuff he sells.
Who doesn’t love a Van Beuren cartoon? “Silvery Moon”, on the bottom left, was released in 1933. And to the right is an ad for a Terry-Toon from 1932. If only Terry’s cartoons looked as good as the ad. 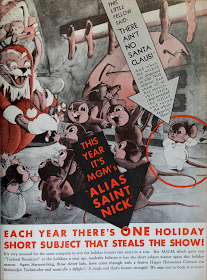 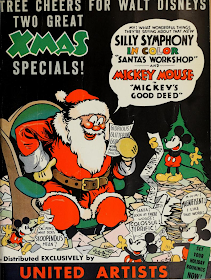 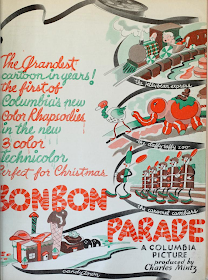 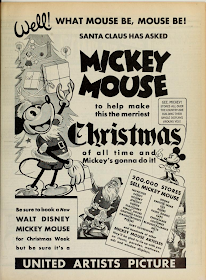 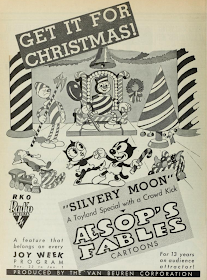 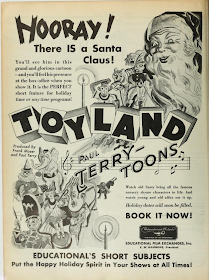 Want to see the Van Beuren short? It was released to television in the early ‘50s as “Candy Town” by Official Films, which sheared off the opening titles (and changed the name for some unknown reason). Van Beuren was certainly consistent. The two cats skip around like the studio’s Tom and Jerry.